Bash Bunny is a simple and powerful multi-function USB attack device and automation platform for all pentesters and sysadmins, designed by Hak5, which allows you to easily perform multiple USB (badUSB) based attacks.

It’s a tiny and portable Debian based linux computer with a USB interface designed specifically to execute payloads when plugged into a target computer.

Bush Bunny can be used to preform attacks on the following operating systems:

This amazing, small and powerful device can run anything that a normal Debian-based linux machines can (linux commands, custom payloads, python scripts, etc.). Once plugged in target machine, Bash Bunny can fake its identity as a keyboard or as other trustworthy media or network device. Therefore, it can mimics the keystrokes, which gives you the ability to inject number of payloads (from Bush Bunny payload repository or your own custom payloads).

Deploying payloads is done by copying a payload.txt to a folder on the Bash Bunny which corresponds with its multi-position payload selector switch. This way carrying multiple payloads and swapping payloads is easy. Select your payload with the switch, plug the Bash Bunny into the victim computer and watch as the multi-color LED indicates the attack status. (Hak5 Bush Bunny docu)

The Bash Bunny is a programmable device that contains two separate attack modes and an Arming Mode. It’s very fast, thanks to the powerful quad-core CPU and desktop-class SSD. This feature allows you to finish your pentesting/hacking tasks in seconds. In addition, very simple ‘Bush Script’ scripting language allows you to write scripts in any text editor, even in the basic notepad. 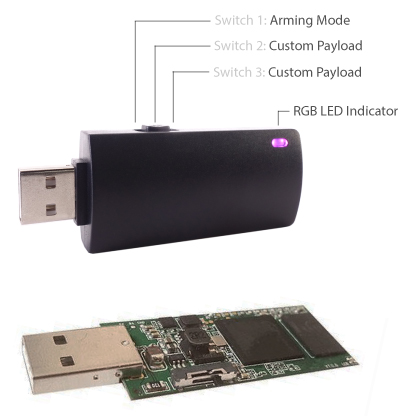 Bash Bunny does not allow you to do anything that you can not already do, but the fact that such a small, portable and powerful device can help you a lot in your pentesting and hacking activities, raise the whole thing to a higher level.

Bash Bunny is truly a very useful physical hacking tool. With this little devil hacking possibilities are limitless. It’s an exciting and fun tool for any pentester, hacker and security professional, but we must say that it’s a bit expensive ($100). If you can’t afford it, you can always make your own Bash Bunny alternative. You will need a few components such as: USB stick, a couple of buttons, switches, resistors, LEDs, a perf board and Raspberry Pi Zero W.

One thought on “Bash Bunny”