HackRF One from Great Scott Gadgets is a SDR (Software Defined Radio) peripheral capable of receiving and transmitting radio signals between the frequencies of 1 MHz and 6 GHz, including most devices operating with:

Software-defined radio (SDR) is a radio communication system where components that have been traditionally implemented in hardware (e.g. mixers, filters, amplifiers, modulators/demodulators, detectors, etc.) are instead implemented by means of software on a personal computer or embedded system.
A basic SDR system may consist of a personal computer equipped with a sound card, or other analog-to-digital converter, preceded by some form of RF front end.

HackRF One is an open source hardware platform, designed to enable test and development of modern and next generation radio technologies, that can be used as a USB peripheral or programmed for stand-alone operation. It works like a sound card of computer processing digital signals to radio waveforms, allowing integration of large-scale communication networks.

The HackRF One is test equipment for RF systems. It has not been tested for compliance with regulations governing transmission of radio signals.

It has an injection molded plastic enclosure and ships with a micro USB cable, but comes without an antenna. To start, you can use recommended ANT500 antenna (supports frequencies from 75 MHz to 1 GH). HackRF One is also very affordable compare to its competitors, which can range from $500 to $1100+.

The HackRF One works with software/computer that can process SDR, such as GNU Radio Companion (GRC). It’s compatible with SDR#, HDSDR and SDR-Console on Windows, GQRX on Linux and RF Analyzer on Android. This SDR device operates in half duplex mode, which means that it’s only able to either receive transmissions ortransmit signals one at a time, rather than receiving and transmitting at the same time. 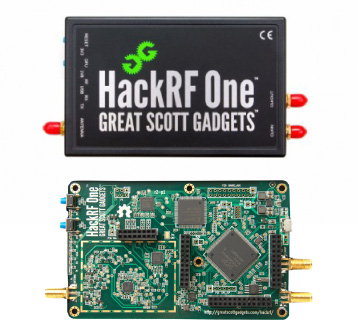 The software can be installed on any Linux machine, but HackRFw works best on the Pentoo Linux.

The easiest way to get started with your HackRF and ensure that it works is to use Pentoo Linux distro, which has full support for HackRF and GNU Radio. If you want to avoid headaches, you can find some setup tricks in the HackRF One Github Wiki.

Hacking with HackRF One

If you’re into Radio Hacking, HackRF One is your go-to tool. The popularity of HackRF One as a security research platform has made it featured in many InfoSec conferences, such as: BlackHat, DEF CON, BSides, etc. You can use HackRF for:

Compare to other devices for radio hacking, HackRF is the first affordable ($300) SDR device tried and tested by professionals and hobbyists. The device is actually made and designed for analysis with a wide frequency range for analyzing radio signals. So, if you like radio hacking, you should give HackRF One a try. You wont be disappointed.

2 thoughts on “HackRF One”