RTL-SDR is a multipurpose SDR device of great utility with physical size very similar to that of a pen drive. Being a Software-defined Radio device, thanks to the chipset inside, belonging to the Radios technology defined by Software, its functionality is multiplied by each computer application that supports it.

Software-defined radio (SDR) is a radio communication system where components that have been traditionally implemented in hardware (e.g. mixers, filters, amplifiers, modulators/demodulators, detectors, etc.) are instead implemented by means of software on a personal computer or embedded system.
A basic SDR system may consist of a personal computer equipped with a sound card, or other analog-to-digital converter, preceded by some form of RF front end.

It is composed of an RTL2832U chipset, a device that can be converted into the SDR receiver (RTL-SDR) that allows experimenting in the wide world of the radio-electric spectrum. This Software-Defined Radio (SDR) can tune into radio frequencies starting from 24MHz up to 2200MHz. The device is within the reach of anyone due to its small size and low cost, and it is very useful for radio professionals, as it represents an excellent signal receiving tool.

Although there are several models, the RTL2832U is the one with the widest range of frequencies, between 50MHz and 2200MHz, with a small interruption between 1100 MHz and 1250 MHz.

Note: Not all DVB-T TV dongles can be used for operations that are described in this article.

The output of the RTL2832U gives 8-bit samples of the I/Q signals, and its higher highest theoretical sampling frequency is 3.2 MS/s. However, quality or samples with this velocity are can be lost and it is recommended to use a frequency of 2.56 MS/s or less, which basically allows us to simultaneously process 2 MHz of the radio spectrum between 50 MHz and 2200 MHz using the USB ports.

The maximum sampling rate for this RTL-SDR device is 3.2 MS/s (mega samples/per second). Normal output is 8 bits, but the efficiency (ENOB) is estimated at 7. Changes in software can enhance this value. It has an input impedance of about 75 Ohms because it is intended for television. The offset loss when using 50 Ohm wiring is negligible (around 0.177 dB).

The frequency range is usually dependent on the type of Tuner. 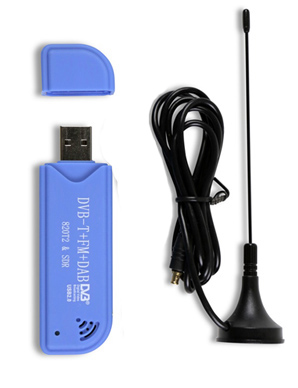 There are dozens of applications developed for the RTL-SDR dongle. It works as a normal broadband radio receiver, but why should you choose this simple SDR device? Its difference lies in the specific functionalities and performance in practice.

The RTL-SDR is a tool of unlimited use. It represents an economic platform in development and it is used worldwide for educational and experimentation purposes mainly by radio professionals but also by all enthusiasts interested in SDR devices. It’s really an inexpensive and highly affordable device (~ $20) with lot of applications. The maximum sampling rate is 3.2 MS/s, you should give it a chance.