YARD Stick One is a sub-1 GHz wireless transceiver, created by Mike Ossmann of Great Scott Gadgets, which can be controlled from your computer. It comes with pre-installed RFCat firmware which allows you to control the wireless transceiver from an interactive Python shell or your own program/script. In addition, you can develop your own firmware or upgrade RFCat since it’s open-source and comes with CC Bootloader pre-installed.

The bootloader consists of two components:
– a piece of firmware that is flashed onto the device and
– a python utility for downloading code and manipulating the flash memory.

Yard Stick One features strong RF performance across its operating frequency range. If you’re a security professional, researcher or pentester and interested in RF, you should also check out Ubertooth One and HackRF One.

YARD Stick One is capable of transmitting or receiving digital wireless signals at frequencies below 1 GHz.  It’s equipped with SMA connector for external antennas and antenna port, which is compatible with different accessories, including GoodFET-compatible expansion/programming header and GIMME-compatible programming test points. 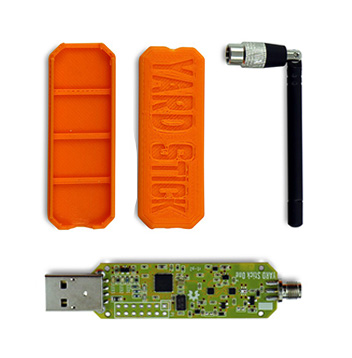 Note: YARD Stick One usually ships without an enclosure and antenna, but the recommended one is ANT500.

SDR devices are very powerful and highly used by all people interested in RF hacking, pentesting and cyber security researching. We all know that equipment for this type of pentesting can be expensive. Well, it doesn’t need to be if we give the chance to this small pseudo-sdr device. Here are some reasons why you should try YARD Stick One:

If we compare YARD Stick One with other well-known RF devices, such as HackRF One or RTL-SDR, we can surely say that it’s easier to get started and use, it’s highly affordable/low cost (~ $130), yet it’s still capable of performing jam and replay attacks without problems.