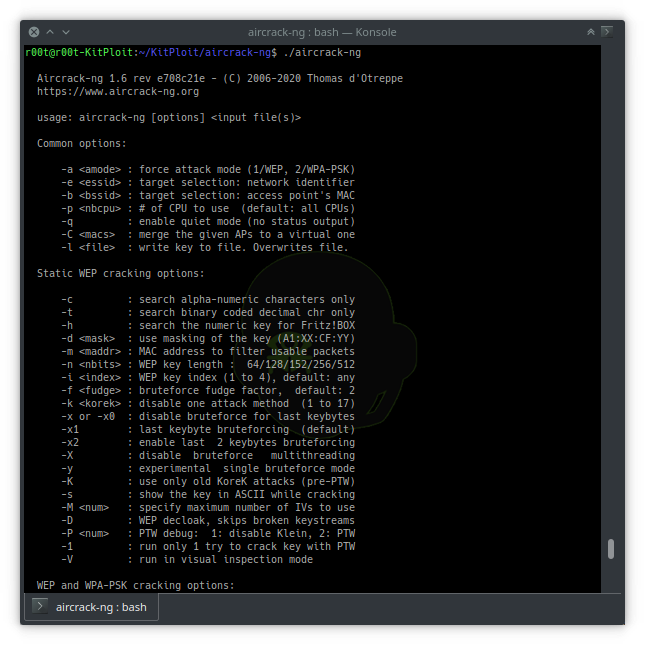 Aircrack-ng is a complete suite of tools to assess WiFi network security.
It focuses on different areas of WiFi security:

All tools are command line which allows for heavy scripting. A lot of GUIs have taken advantage of this feature. It works primarily Linux but also Windows, OS X, FreeBSD, OpenBSD, NetBSD, as well as Solaris and even eComStation 2.

It’s been more than a year since the last release, and this one brings a ton of improvements.

The most noticeable change are the rate display in Airodump-ng. Previously, it went up to 54Mbit. Now, it takes into account the complexity of 802.11n/ac and calculates the maximum rate that can be achieved on the AP. Expect 802.11ax rates in the next release. We brought basic UTF-8 support for ESSID and if you ever come across WPA3 or OWE, this will be displayed correctly as well. Airodump-ng has had the ability to read PCAP files for quite some time, which can be handy to generate one of the CSV/netxml or other output formats available. However, signal levels were not displayed; this has now been fixed. A new option has been added to read the files in realtime, instead of reading all at once.

This reorganization also updated the build system, which now requires automake 1.14+. This was a problem on CentOS 7, but we provide a script to install these requirements from source to solve the issue; although automake 1.14 (and other dependencies) have been released 6+ years ago, CentOS is the only distribution that doesn’t have it, and it was decided to provide a script to install the requirements was a small price to pay to improve and simplify the build system.

Other tools received fixes as well:

We have been working on our infrastructure and have a buildbot server with quite a few systems. If you head up to our buildbot landing page, you can see the extent of the build system: 14 systems to test build on top of AppVeyor, TravisCI, and Coverity Scan, plus one to automatically package it and upload packages to packagecloud.io. It gets triggered every time we push code to our GitHub repository and you can see the details of each build for each commit on GitHub. We have an earlier blog post where you can find some details of our CI/CD.
We are currently working on bringing Mac infrastructure as well.

We keep working on our automated tests, and a few have been added; this release also brings integration tests (16 for now) to automatically test different features of airodump-ng, aireplay-ng, airbase-ng and others.

In case you find security issues in Aircrack-ng or our domains, we recently added a security policy to explain how to report them. It is on GitHub, on our website, as well as security.txt.

And finally, what you’ve been waiting for, the full changelog:

Installing required and optional dependencies
Below are instructions for installing the basic requirements to build aircrack-ng for a number of operating systems.
Note: CMocka, tcpdump, screen, HostAPd and WPA Supplicant should not be dependencies when packaging Aircrack-ng.

Cygwin
Cygwin requires the full path to the setup.exe utility, in order to automate the installation of the necessary packages. In addition, it requires the location of your installation, a path to the cached packages download location, and a mirror URL.
An example of automatically installing all the dependencies is as follows:

Compiling
To build aircrack-ng, the Autotools build system is utilized. Autotools replaces the older method of compilation.
NOTE: If utilizing a developer version, eg: one checked out from source control, you will need to run a pre-configure script. The script to use is one of the following: autoreconf -i or env NOCONFIGURE=1 ./autogen.sh.
First, ./configure the project for building with the appropriate options specified for your environment:

TIP: If the above fails, please see above about developer source control versions.
Next, compile the project (respecting if make or gmake is needed):

Finally, the additional targets listed below may be of use in your environment:

./configure flags
When configuring, the following flags can be used and combined to adjust the suite to your choosing:

Packaging
Automatic detection of CPU optimization is done at run time. This behavior is desirable when packaging Aircrack-ng (for a Linux or other distribution.)
Also, in some cases it may be desired to provide your own flags completely and not having the suite auto-detect a number of optimizations. To do this, add the additional flag --without-opt to the ./configure line:
./configure --without-opt

Documentation
Documentation, tutorials, … can be found on https://aircrack-ng.org
See also manpages and the forum.
For further information check the README file