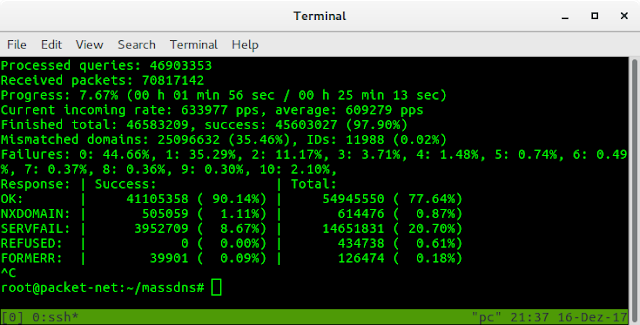 MassDNS is a simple high-performance DNS stub resolver targetting those who seek to resolve a massive amount of domain names in the order of millions or even billions. Without special configuration, MassDNS is capable of resolving over 350,000 names per second using publicly available resolvers.

Major changes
This version of MassDNS is currently experimental. In order to speed up the resolving process, the ldns dependency has been replaced by a custom stack-based DNS implementation (which currently only supports the text representation of the most common DNS records). Furthermore, epoll has been introduced in order to lighten CPU usage when operating with a low concurrency which may have broken compatibility with some platforms. In case of bugs, please create an issue and switch to the more mature version 0.2.
Also note that the command line interface has changed slightly due to criticism of the output complexity. Additionally, the default values of the -s and -i parameters have been changed. The repository structure has been changed as well.

Compilation
Clone the git repository and cd into the project root folder. Then run make to build from source. If you are not on Linux, run make nolinux. On Windows, the Cygwin packages gcc-core, git and make are required.

This overview may be incomplete. For more options, especially concerning output formatting, use --help.

Example
Resolve all AAAA records from domains within domains.txt using the resolvers within resolvers.txt in lists and store the results within results.txt:

This is equivalent to:

Example output
By default, MassDNS will output response packets in text format which looks similar to the following:

The resolver IP address is included in order to make it easier for you to filter the output in case you detect that some resolvers produce bad results.

Resolving
The repository includes the file resolvers.txt consisting of a filtered subset of the resolvers provided by the subbrute project. Please note that the usage of MassDNS may cause a significant load on the used resolvers and result in abuse complaints being sent to your ISP. Also note that the provided resolvers are not guaranteed to be trustworthy. The resolver list is currently outdated with a large share of resolvers being dysfunctional.
MassDNS’s DNS implementation is currently very sporadic and only supports the most common records. You are welcome to help changing this by collaborating.

PTR records
MassDNS includes a Python script allowing you to resolve all IPv4 PTR records by printing their respective queries to the standard output.

Please note that the labels within in-addr.arpa are reversed. In order to resolve the domain name of 1.2.3.4, MassDNS expects 4.3.2.1.in-addr.arpa as input query name. As a consequence, the Python script does not resolve the records in an ascending order which is an advantage because sudden heavy spikes at the name servers of IPv4 subnets are avoided.

As an additional method of reconnaissance, the ct.py script extracts subdomains from certificate transparency logs by scraping the data from crt.sh:

The files names.txt and names_small.txt, which have been copied from the subbrute project, contain names of commonly used subdomains. Also consider using Jason Haddix’ subdomain compilation with over 1,000,000 names.

Security
MassDNS does not require root privileges and will therefore drop privileges to the user called “nobody” by default when being run as root. If the user “nobody” does not exist, MassDNS will refuse execution. In this case, it is recommended to run MassDNS as another non-privileged user. The privilege drop can be circumvented using the --root argument which is not recommended. Also note that other branches than master should not be used in production at all.

Performance tuning
MassDNS is a simple single-threaded application designed for scenarios in which the network is the bottleneck. It is designed to be run on servers with high upload and download bandwidths. Internally, MassDNS makes use of a hash map which controls the concurrency of lookups. Setting the size parameter -s hence allows you to control the lookup rate. If you are experiencing performance issues, try adjusting the -s parameter in order to obtain a better success rate.

Rate limiting evasion
In case rate limiting by IPv6 resolvers is a problem, have a look at the freebind project including packetrand, which will cause each packet to be sent from a different IPv6 address from a routed prefix.

Result authenticity
If the authenticity of results is highly essential, you should not rely on the included resolver list. Instead, set up a local unbound resolver and supply MassDNS with its IP address. In case you are using MassDNS as a reconnaissance tool, you may wish to run it with the default resolver list first and re-run it on the found names with a list of trusted resolvers in order to eliminate false positives.