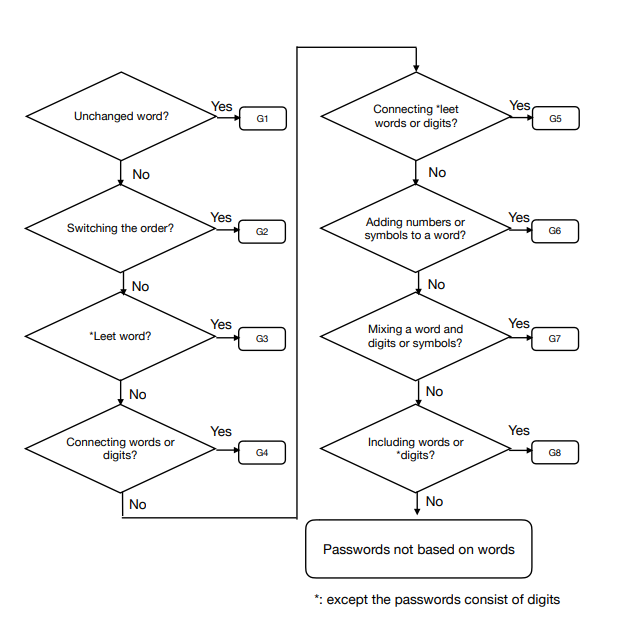 Wiki
Since it does not require pushing new versions to update it, the wiki is a source of random notes about this project: https://github.com/lakiw/pcfg_cracker/wiki

Documents Folder
Several documents can also be found in the Documents folder of this repository.

Overview
This project uses machine learning to identify password creation habits of users. A PCFG model is generated by training on a list of disclosed plaintext/cracked passwords. In the context of this project, the model is referred to as a ruleset and contains many different parts of the passwords identified during training, along with their associated probabilities. This stemming can be useful for other cracking tools such as PRINCE, and/or parts of the ruleset can be directly incorporated into more traditional dictionary-based attacks. This project also includes a PCFG guess generator that makes use of this ruleset to generate password guesses in probability order. This is much more powerful than standard dictionary attacks, and in testing has proven to be able to crack passwords on average with significantly less guesses than other publicly available methods. The downside is that generating guesses in probability order is slow, meaning it is creating on average 50-100k guesses a second, where GPU based algorithms can create millions to billions (and up), of guesses a second against fast hashing algorithms. Therefore, the PCFG guesser is best used against large numbers of salted hashes, or other slow hashing algorithms, where the performance cost of the algorithm is made up for with the accuracy of the guesses.

Training
The default ruleset included in this repo was created by training on a 1 million password subset of the RockYou dataset. Better performance can be achieved by training on the full 32 million password set for RockYou, but that was excluded to keep the download size small. You can use the default ruleset to start generating passwords without having to train on a new list, but it is recommended to train on a target set of passwords that may be closer to what you are trying to target. If you do create your own ruleset, here is a quick guide:

Guess Generation
This generates guesses to stdout using a previously training PCFG ruleset. These guesses can then be piped into any program that you want to make use of them. If no ruleset is specified, the default ruleset DEFAULT will be used. For the purposes of this guide it will assume the ruleset being used is NEW_RULESET.

Password Strength Scoring
There are many cases where you may want to estimate the probability of a password being generated by a previously trained ruleset. For example, this could be part of a password strength metric, or used for other research purposes. A sample program has been included to perform this.

Prince-Ling Wordlist Generator
**Name: **PRINCE Language Idexed N-Grams (Prince-Ling)
Overview: Constructs customized wordlists based on an already trained PCFG ruleset/grammar for use in PRINCE style combinator attacks. The idea behind this was since the PCFG trainer is already breaking up a training set up passwords into individual parsings, that information could be leveraged to make targeted wordlists for other attacks.
Basic Mechanics: Under the hood, the Prince-Ling tool is basically a mini-PCFG guess generator. It strips out the Markov guess generation, and replaces the base structures used in normal PCFG attacks with a significantly reduced base-structure tailored for generating PRINCE wordlists. This allows generating dictionary words in probability order with an eye to how useful those words are expected to be in a PRINCE attack.
Using Prince-Ling

Contributing
If you notice any bugs, or if you have a feature you would like to see added, please open an issue on this github page. I also accept pull requests, though ideally please link a pull request to an issue so that I can more easily review it, ask questions, and better understand the changes you are making.
There’s a lot of improvements that can be made to modeling password creation strategies using PCFGs. I’m very open to new ideas, changes, and suggestions. Just because the code currently does something a certain way doesn’t mean that’s the best option. For example, the fundamental base_structure of the current approach where masks are generated for alpha strings, digits, other, etc, was chosen because it was the “easiest” option to impliment. My team had a lot of debate that a better option might be to start with a base word, and then model more traditional mangling rules applied to it as transisions in the PCFG. So feel free to go wild with this code!