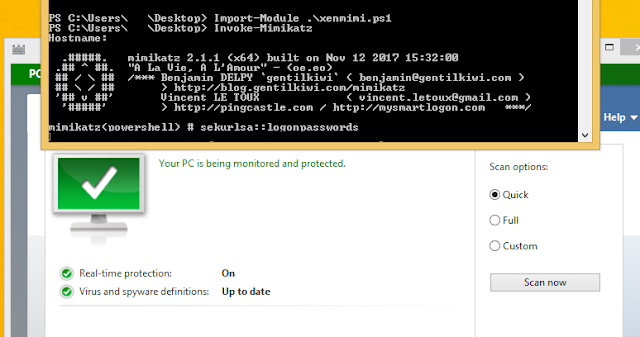 Tired of wasting lots of time obfuscating PowerShell scripts like invoke-mimikatz only to have them get detected anyway? Wouldn’t it be awesome if you could take any script and automatically and with almost no effort generate a near-infinite amount of variants in order to defeat signature-based antivirus detection mechanisms?
WELL, NOW YOU CAN! For the low low price of free! Xencrypt is a PowerShell crypter that uses AES encryption and Gzip/DEFLATE compression to with every invocation generate a completely unique yet functionally equivalent output script given any input script. It does this by compressing and encrypting the input script and storing this data as a payload in a new script which will unencrypt and decompress the payload before running it. In essence, it is to PowerShell what a PE crypter is.

You will now have an encrypted xenmimi.ps1 file in your current working directory. You can use it in the same way as you would the original script, so in this case:

It also supports recursive layering via the -Iterations flag.

This will compress and encrypt it 100 times and is useful for dynamic AV bypasses because they have a time-out for analyzing code. There’s no fakery here like sleeps that the dynamic scan can skip to get to the end — it has to go through the entire chain to get to the malicious payload which it usually never does since they normally time out after a second or two or scanning.
Warning though, the files can get big and generating the output file can take a very long time depending on the scripts and number of iterations requested.

Contributing
If you want to contribute, feel free to contact on Twitter ( @SamuelAnttila ) or submit pull requests. Any and all ideas for improvements are welcome and you’ll be credited appropriately, just please try to keep it to one file in order to make the tool easy to take with you in your kit.