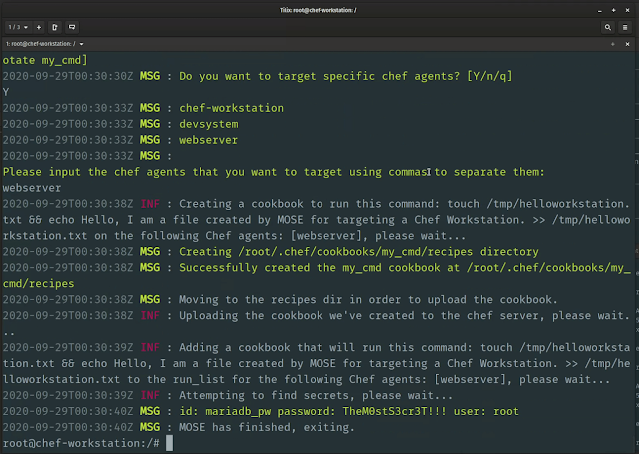 MOSE is a post exploitation tool that enables security professionals with little or no experience with configuration management (CM) technologies to leverage them to compromise environments. CM tools, such as Puppet, Chef, Salt, and Ansible are used to provision systems in a uniform manner based on their function in a network. Upon successfully compromising a CM server, an attacker can use these tools to run commands on any and all systems that are in the CM server’s inventory. However, if the attacker does not have experience with these types of tools, there can be a very time-consuming learning curve. MOSE allows an operator to specify what they want to run without having to get bogged down in the details of how to write code specific to a proprietary CM tool. It also automatically incorporates the desired commands into existing code on the system, removing that burden from the user. MOSE allows the operator to choose which assets they want to target within the scope of the server’s inventory, whether this is a subset of clients or all clients. This is useful for targeting specific assets such as web servers or choosing to take over all of the systems in the CM server’s inventory.

You must download and install the following for MOSE to work:

Be sure to properly set your GOROOT, PATH and GOPATH env vars

Grab the code without having to clone the repo:

Install all go-specific dependencies and build the binary (be sure to cd into the repo before running this):

A self-signed certificate and key are provided for you, although you really shouldn’t use them. This key and certificate are widely distributed, so you can not expect privacy if you do choose to use them. They can be found in the data directory.

You can find some examples of how to run MOSE in EXAMPLES.md.

Test labs that can be run with MOSE are at these locations:

The following resources were used to help motivate the creation of this project: