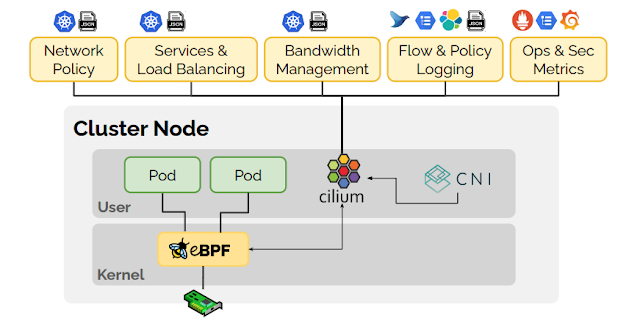 Cilium is open source software for providing and transparently securing network connectivity and loadbalancing between application workloads such as application containers or processes. Cilium operates at Layer 3/4 to provide traditional networking and security services as well as Layer 7 to protect and secure use of modern application protocols such as HTTP, gRPC and Kafka. Cilium is integrated into common orchestration frameworks such as Kubernetes.

A new Linux kernel technology called eBPF is at the foundation of Cilium. It supports dynamic insertion of eBPF bytecode into the Linux kernel at various integration points such as: network IO, application sockets, and tracepoints to implement security, networking and visibility logic. eBPF is highly efficient and flexible. To learn more about eBPF, visit eBPF.io.

Listed below are the actively maintained release branches along with their latest minor release, corresponding image pull tags and their release notes:

Ability to secure modern application protocols such as REST/HTTP, gRPC and Kafka. Traditional firewalls operates at Layer 3 and 4. A protocol running on a particular port is either completely trusted or blocked entirely. Cilium provides the ability to filter on individual application protocol requests such as:

See the section Layer 7 Policy in our documentation for the latest list of supported protocols and examples on how to use it.


Secure service to service communication based on identities

Modern distributed applications rely on technologies such as application containers to facilitate agility in deployment and scale out on demand. This results in a large number of application containers to be started in a short period of time. Typical container firewalls secure workloads by filtering on source IP addresses and destination ports. This concept requires the firewalls on all servers to be manipulated whenever a container is started anywhere in the cluster.

A simple flat Layer 3 network with the ability to span multiple clusters connects all application containers. IP allocation is kept simple by using host scope allocators. This means that each host can allocate IPs without any coordination between hosts.

Cilium implements distributed load balancing for traffic between application containers and to external services and is able to fully replace components such as kube-proxy. The load balancing is implemented in eBPF using efficient hashtables allowing for almost unlimited scale.

For north-south type load balancing, Cilium’s eBPF implementation is optimized for maximum performance, can be attached to XDP (eXpress Data Path), and supports direct server return (DSR) as well as Maglev consistent hashing if the load balancing operation is not performed on the source host.

Cilium implements bandwidth management through efficient EDT-based (Earliest Departure Time) rate-limiting with eBPF for container traffic that is egressing a node. This allows to significantly reduce transmission tail latencies for applications and to avoid locking under multi-queue NICs compared to traditional approaches such as HTB (Hierarchy Token Bucket) or TBF (Token Bucket Filter) as used in the bandwidth CNI plugin, for example.

The ability to gain visibility and to troubleshoot issues is fundamental to the operation of any distributed system. While we learned to love tools like tcpdump and ping and while they will always find a special place in our hearts, we strive to provide better tooling for troubleshooting. This includes tooling to provide:


What is eBPF and XDP?

Berkeley Packet Filter (BPF) is a Linux kernel bytecode interpreter originally introduced to filter network packets, e.g. for tcpdump and socket filters. The BPF instruction set and surrounding architecture has recently been significantly reworked with additional data structures such as hash tables and arrays for keeping state as well as additional actions to support packet mangling, forwarding, encapsulation, etc. Furthermore, a compiler back end for LLVM allows for programs to be written in C and compiled into BPF instructions. An in-kernel verifier ensures that BPF programs are safe to run and a JIT compiler converts the BPF bytecode to CPU architecture specific instructions for native execution efficiency. BPF programs can be run at various hooking points in the kernel such as for incoming packets, outgoing packets, system calls, kprobes, uprobes, tracepoints, etc.

To read up on the necessary kernel versions to run the BPF runtime, see the section Prerequisites. 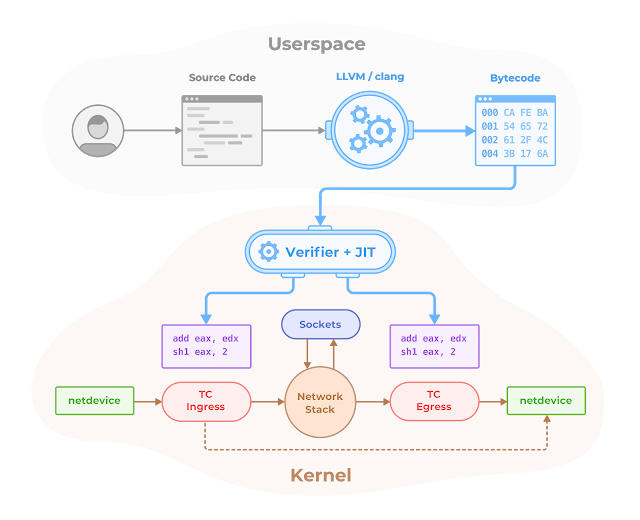 XDP is a further step in evolution and enables to run a specific flavor of BPF programs from the network driver with direct access to the packet’s DMA buffer. This is, by definition, the earliest possible point in the software stack, where programs can be attached to in order to allow for a programmable, high performance packet processor in the Linux kernel networking data path.

Further information about BPF and XDP targeted for developers can be found in the BPF and XDP Reference Guide.

To know more about Cilium, it’s extensions and use cases around Cilium and BPF take a look at Further Readings section.

Join the Cilium Slack channel to chat with Cilium developers and other Cilium users. This is a good place to learn about Cilium, ask questions, and share your experiences.

See Special Interest groups for a list of all SIGs and their meeting times.

We host a weekly community YouTube livestream called eCHO which (very loosely!) stands for eBPF & Cilium Office Hours. Join us live, catch up with past episodes, or head over to the eCHO repo and let us know your ideas for topics we should cover.

Domhttpx – A Google Search Engine Dorker With HTTP Toolkit Built With Python, Can Make It Easier For You To Find Many URLs/IPs At Once With Fast Time

PowerShellArmoury – A PowerShell Armoury For Security Guys And Girls