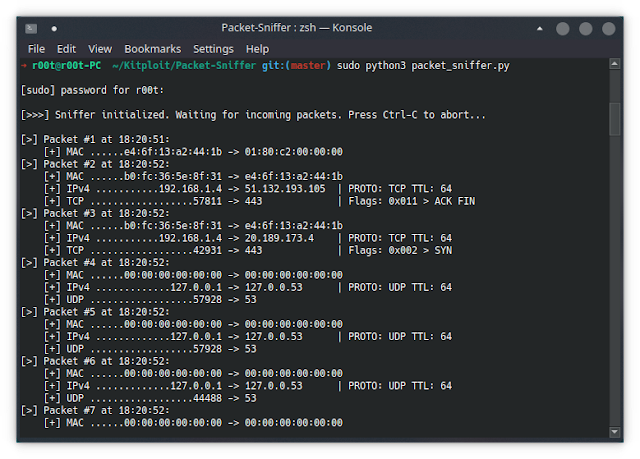 A simple pure-Python network packet sniffer. Packets are disassembled as they arrive at a given network interface controller and their information is displayed on the screen.

This application maintains no dependencies on third-party modules and can be run by any Python 3.x interpreter.

Simply clone this repository with git clone and execute the packet_sniffer.py file as described in the following Usage section.

This project is dependent on PF_PACKET – a stateful packet filter not found on Windows or Mac OS X. For demonstration purposes, you can try out this package in a Docker container. Although it will not have full access to localhost on your machine, you can still sniff on the Docker subnet and at least get the module running.

Use this command to build and run from the project directory:

Note that the entry command is simply python packet_sniffer.py, so feel free to use the full functionality of the module by overriding the default command. Remember that we tagged the container with the name “sniff” before, so we can pass command-line arguments to the sniffer in the following manner:

Usage of --network host is not supported on OS X or Windows so this container won’t be fully functional – but you will see packets traveling within the docker subnet.

The use of code contained in this repository, either in part or in its totality, for engaging targets without prior mutual consent is illegal. It is the end user’s responsibility to obey all applicable local, state and federal laws.

Developers assume no liability and are not responsible for misuses or damages caused by any code contained in this repository in any event that, accidentally or otherwise, it comes to be utilized by a threat agent or unauthorized entity as a means to compromise the security, privacy, confidentiality, integrity, and/or availability of systems and their associated resources by leveraging the exploitation of known or unknown vulnerabilities present in said systems, including, but not limited to, the implementation of security controls, human- or electronically-enabled.

The use of this code is only endorsed by the developers in those circumstances directly related to educational environments or authorized penetration testing engagements whose declared purpose is that of finding and mitigating vulnerabilities in systems, limiting their exposure to compromises and exploits employed by malicious agents as defined in their respective threat models.