Implementation along with my ShellcodeFluctuation brings Offensive Security community sample implementations to catch up on the offering made by commercial C2 products, so that we can do no worse in our Red Team toolings.

Current implementation differs heavily to what was originally published. This is because I realised there is a way simpler approach to terminate thread’s call stack processal and hide shellcode’s related frames by simply writing 0 to the return address of the first frame we control:

The previous implementation, utilising StackWalk64 can be accessed in this commit c250724.

This implementation is much more stable and works nicely on both Debug and Release under two architectures – x64 and x86.

This is how a call stack may look like when it is NOT spoofed:

This in turn, when thread stack spoofing is enabled:

Above we can see that the last frame on our call stack is our MySleep callback. One can wonder does it immediately brings opportunities new IOCs? Hunting rules can look for threads having call stacks not unwinding into following expected thread entry points located within system libraries:

However the call stack of the spoofed thread may look rather odd at first, a brief examination of my system shown, that there are other threads not unwinding to the above entry points as well:

The above screenshot shows a thread of unmodified Total Commander x64. As we can see, its call stack pretty much resembles our own in terms of initial call stack frames.

Why should we care about carefully faking our call stack when there are processes exhibiting traits that we can simply mimic?

The rough algorithm is following:

Function return addresses are scattered all around the thread’s stack memory area, pointed to by RBP/EBP register. In order to find them on the stack, we need to firstly collect frame pointers, then dereference them for overwriting: 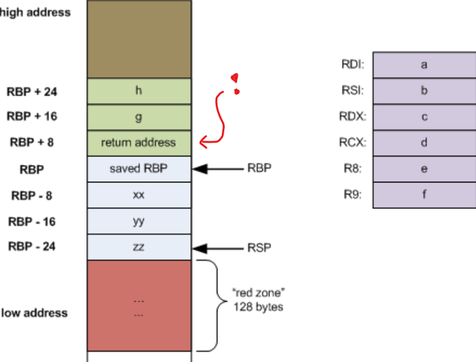 Initial implementation of ThreadStackSpoofer did that in walkCallStack and spoofCallStack functions, however the current implementation shows that these efforts are not required to maintain stealthy call stack.

Look at the code and its implementation, understand the concept and re-implement the concept within your own Shellcode Loaders that you utilise to deliver your Red Team engagements. This is an yet another technique for advanced in-memory evasion that increases your Teams’ chances for not getting caught by Anti-Viruses, EDRs and Malware Analysts taking look at your implants.

While developing your advanced shellcode loader, you might also want to implement:

Actually this is not (yet) a true stack spoofing

As it’s been pointed out to me, the technique here is not yet truly holding up to its name for being a stack spoofer. Since we’re merely overwriting return addresses on the thread’s stack, we’re not spoofing the remaining areas of the stack itself. Moreover we’re leaving our call stack unwindable meaking it look anomalous since the system will not be able to properly walk the entire call stack frames chain.

However I’m aware of these shortcomings, at the moment I’ve left it as is since I cared mostly about evading automated scanners that could iterate over processes, enumerate their threads, walk those threads stacks and pick up on any return address pointing back to a non-image memory (such as SEC_PRIVATE – the one allocated dynamically by VirtuaAlloc and friends). A focused malware analyst would immediately spot the oddity and consider the thread rather unusual, hunting down our implant. More than sure about it. Yet, I don’t believe that nowadays automated scanners such as AV/EDR have sorts of heuristics implemented that would actually walk each thread’s stack to verify whether its un-windable ¯_(ツ)_/¯ .

In order to improve this technique, one can aim for a true Thread Stack Spoofer by inserting carefully crafted fake stack frames established in an reverse-unwinding process. Read more on this idea below.

Hours-long conversation with namazso teached me, that in order to aim for a proper thread stack spoofer we would need to reverse x64 call stack unwinding process. Firstly, one needs to carefully acknowledge the stack unwinding process explained in (a) linked below. The system when traverses Thread call stack on x64 architecture will not simply rely on return addresses scattered around the thread’s stack, but rather it:

In order to interfere with this process we wuold need to revert it by having our reverted form of RtlVirtualUnwind. We would need to iterate over functions defined in a module (let’s be it kernel32), scan each function’s UNWIND_CODE codes and closely emulate it backwards (as compared to RtlVirtualUnwind and precisely RtlpUnwindPrologue) in order to find locations on the stack, where to put our fake return addresses.

The restored RSP must be set with the RSP taken from wherever control flow entered into our MySleep so that all our frames become hidden, as a result of third gadget unwinding there.

In order to begin the process, one can iterate over executable’s .pdata by dereferencing IMAGE_DIRECTORY_ENTRY_EXCEPTION data directory entry. Consider below example:

The process is a bit convoluted, yet boils down to reverting thread’s call stack unwinding process by substituting arbitrary stack frames with carefully selected other ones, in a ROP alike approach.

This PoC does not follows replicate this algorithm, because my current understanding allows me to accept the call stack finishing on an EXE-based stack frame and I don’t want to overcompliate neither my shellcode loaders nor this PoC. Leaving the exercise of implementing this and sharing publicly to a keen reader. Or maybe I’ll sit and have a try on doing this myself given some more spare time 🙂

If you plan on adding this functionality to your own shellcode loaders / toolings be sure to AVOID unhooking kernel32.dll. An attempt to unhook kernel32 will restore original Sleep functionality preventing our callback from being called. If our callback is not called, the thread will be unable to spoof its own call stack by itself.

If that’s what you want to have, than you might need to run another, watchdog thread, making sure that the Beacons thread will get spoofed whenever it sleeps.

If you’re using Cobalt Strike and a BOF unhook-bof by Raphael’s Mudge, be sure to check out my Pull Request that adds optional parameter to the BOF specifying libraries that should not be unhooked.

This way you can maintain your hooks in kernel32:

This PoC was designed to work with Cobalt Strike’s Beacon shellcodes. The Beacon is known to call out to kernel32!Sleep to await further instructions from its C2. This loader leverages that fact by hooking Sleep in order to perform its housekeeping.

This implementation might not work with other shellcodes in the market (such as Meterpreter) if they don’t use Sleep to cool down. Since this is merely a Proof of Concept showing the technique, I don’t intend on adding support for any other C2 framework.

When you understand the concept, surely you’ll be able to translate it into your shellcode requirements and adapt the solution for your advantage.

Please do not open Github issues related to “this code doesn’t work with XYZ shellcode”, they’ll be closed immediately.

This and other projects are outcome of sleepless nights and plenty of hard work. If you like what I do and appreciate that I always give back to the community, Consider buying me a coffee (or better a beer) just to say thank you!