Dockerized Android is a container-based framework that allows to execute and Android Emulator inside Docker and control it through a browser. This project has been developed in order to provide a starting point for integrating mobile security components into Cyber Ranges but it can be used for any purpose. Anyway, for development and testing purposes the project suggested is docker-android. 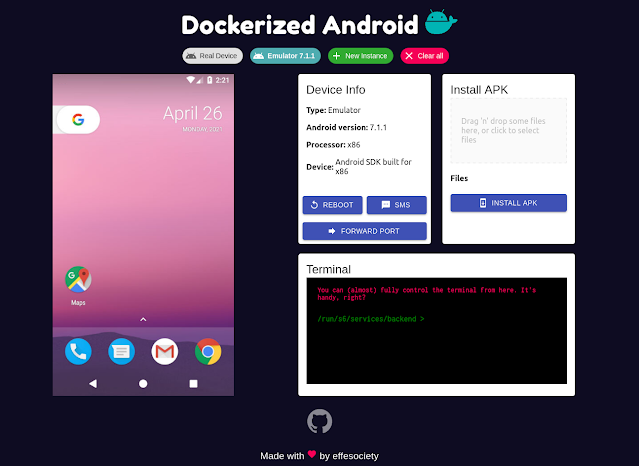 As stated in the brief description above this project has been created in order to provide a starting point for the introduction of mobile security components into Cyber Ranges. For this reasons the features already developed and the ones that will be added in the feature will help the user to make easier to setup a realistic simulation (for example for security training). This README is quite long, maybe you just wanna skip to the “How to run” part.

The following features are currently available:

The project is composed by three main pieces: 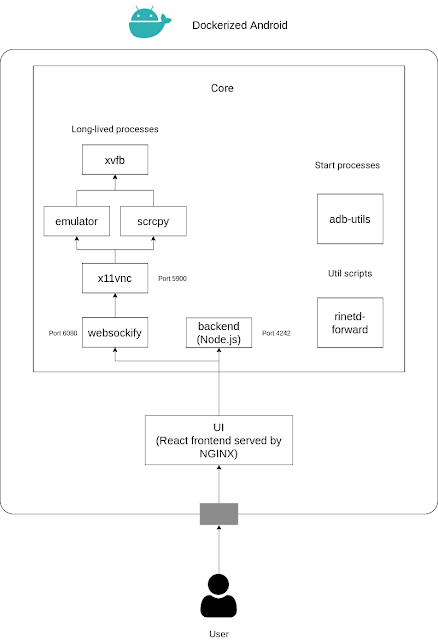 The Core component is the one that executes all the processes needed to run an Android Com-ponent (Emulated or Real) inside a Docker container, also ex-posing some features to the outside. It is with no doubt the most complex part becauseit has to manage different processes in order to provide a set of features. The above figure shows a clear distinction between long-lived processes,start processes and util scripts. Besides, this figure shows that there are 6 long-lived processes, this is a little inaccuracy added to provide a general overview of the Core component, in reality there are two different flavours of the Core component:

The Instance Manager component has the job to provide all the informations(i.e., addresses and ports) about the running Cores through a single REST API. This is done by writing a simple JSON configuration file that contains all the information about the Cores that are present into the docker-compose in order to avoid the painful job of manually adding one by one. The structure of the JSON configuration file is the following:

In order to see a full example on how to run the platform you may watch the docker-compose available in the root directory. This setup contains two different cores and also the optional Instance Manager component. Once you understood how it works you may change it to satisfy any needs you have.

Docker and Docker Compose have to be installed on your machine.

This platform behaves in different ways based on the host OS, here is a table that summarizes the current compatibility:

For Windows and OS X you have to use a Linux VM with nested virtualization.

To check if your Linux machine supports nested virtualization you may run the following commands:

To use the Core for Real Device on OS X you may:

For the wireless connection Google provides a simple tutorial. To connect to the host adb from within the container you have to manually enter inside the container and run:

One line command to run

The command to start using the framework with two cores and a instance manager is simply:

You may configure some features to customize the setup through ENV variables, the following table provides a list of all of them:

The REAL_DEVICE_SERIAL variable is fundamental if there is more than one physical device attached because if missing nothing will work. Finally there is a list of exposed ports by each component: