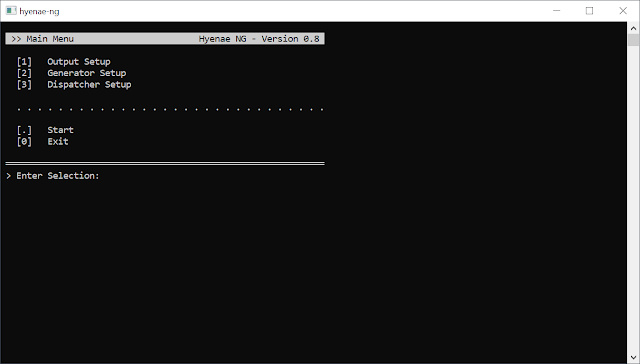 Hyenae NG (Next Generation) is a re-write of the original Hyenae tool which was originally published back in the year 2010.

Besides switching from C to C++, using modern design concepts, Hyenae NG was (just like the original Hyenae) written with maximum portability in mind. Since the original Hyenae had a very complex command line syntax Hyenae NG comes with a fast and intuitively usable command line menu that will allow you to effectively set up even complex stress-tests or attack scenarios within seconds. 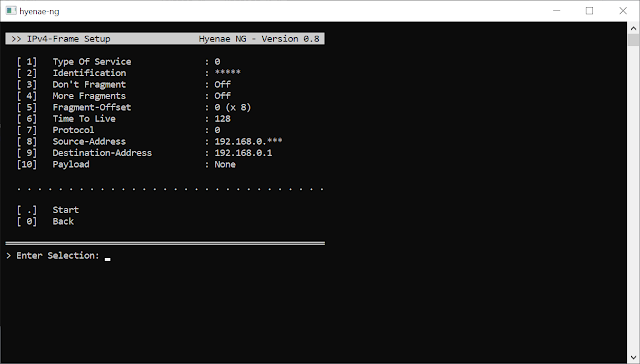 The original Hyenae project started out as a study of network stack implementations but then quickly gained more complex features such as a remote daemon and an attack asistent. Even if it was widely accepted and is still a very commonly used tool in todays pen-testing workflows it has a complex command line syntax and requires some training and research in order to be used properly.

With Hyenae NG i would like to provide the complexity and felxibility of Hyenae in a clean and easy to use command line tool which can be instantly used without any futher research on the command line arguments to pass for the specific scenarios.

If you like this project and would like to contribute to it (in which way ever), feel free to do so via my GitHub page or by contacting me directly. Improvement ideas and bug reports are very welcomed.

Once you start Hyenae NG, it will enter the main menu state. From here you can set up your desired output, generator and dispatcher configuration.

A lot of packet generator parameters such as for address-, port- and number- fields can be providing with a generator pattern. These patterns will be used in order to generate a new value on every new packet. Here are some examples of a few basic patterns:

When Hyenae NG is started it will look for a configuration file named “hyenae.conf” in it’s startup folder. If the file does not exist it will automatically create it.