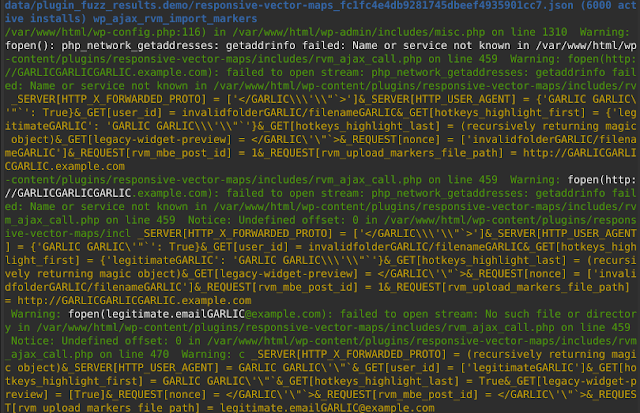 A proof-of-concept WordPress plugin fuzzer used in the research described in https://kazet.cc/2022/02/03/fuzzing-wordpress-plugins.html that helped to discover more than 140 vulnerablities in WordPress plugins installed on almost 15 million sites.

If you want to continue the research, start with less popular plugins – if a plugin achieved at least 10k active installs between October 2021 and January 2022, I have most probably looked at the fuzzer reports (and most focus has been put on plugins having at least 20k active installs). Because there is a lot of randomness in how fuzzer works, some vulnerabilities in these plugins remain undiscovered – but fewer ones.

For obvious reasons, the examples will contain only vulnerabilities that have already been fixed.

Let’s assume you are fuzzing responsive-vector-maps in version 6.4.0:

After the fuzzing finishes (which would take 10-30 minutes for this plugin) you can call:

You will see, among others:

That means that the fuzzer detected executing fopen() on a known payload. Most of the payloads contain the word GARLIC in them to facilitate automatic detection in output. You may see or configure them in docker_image/magic_payloads.php.

Then, you may browse the source code and see that indeed the wp_ajax_rvm_import_markers endpoint uses the file content to render output, thus allowing you to read arbitrary files on the server: CVE-2021-24947.

What you see in white is a crash considered interesting (you may modify them or add new ones in crash_detectors.py). Green is the context. In blue you see the report file name (with plugin name), plugin popularity and endpoint name (here: the ajax action name).

The data in yellow are what payloads were injected into what variables.

Let’s assume you are fuzzing page-builder-add in version 1.4.9.4:

After printing the results, you will see known payload echoed back:

You can then manually test whether indeed this place (remember: in blue you have the endpoint name, here: the menu page name) is vulnerable to XSS. In this case, it is: CVE-2021-25067.

After printing the results, you will see update_option being called:

Analysis of the endpoint’s code will tell you that this indeed leads to a stored XSS vulnerability: CVE-2021-25075.

Unfortunately, for most of the plugins the fuzzer doesn’t find any interesting crashes, and for the rest, most of the reports are false positives. For example, if you see:

This can mean, that wp_mail is indeed called, but you don’t control the recipient and most of the subject. If you want to be sure, look at the plugin source.

The first run of fuzzing or of the tests may take about an hour, because we need to build the Docker image with instrumented PHP and WordPress.

Fuzzing a plugin by name

Fuzzing a plugin from file

You can also install a plugin from a local zip file:

To print what the fuzzer found, use:

To run the tests, use:

Warning: the tests take long (more than an hour) and because they check whether the fuzzer would find vulnerabilities, they fail with some probability.

To reformat and check the code, use:

You may start a test environment with only one plugin installed using:

You can install a plugin using its slug or from a local zip file.

There will be two test users in the database:

Extending and configuring the fuzzer

This tool is a proof of concept – this section contains places where it can be improved to find more vulnerabilities.

You may want to edit filtering.py — it contains the rules that deem a particular crash important or not. If you change them, you may have more false positives, but find more vulnerabilities as well. For example, the only header that I consider interesting when emitted is the Location header, to detect Open Redirect vulnerabilities. That is just one idea and you may have others.

Another file that may be worth extending is docker_image/patch_wordpress.sh. It describes calls to which functions will be logged as interesting.

If you want to inject other payloads (or change the probabilities with which they are injected) edit docker_image/magic_payloads.php and docker_image/fuzz/config.py.

Fuzzing files (i.e. executing each PHP file with injected payloads) has been disabled because it didn’t lead to many findings. Uncomment files in config.DEFAULT_ENABLED_FEATURES to change that.

To update these blocklists, use ./bin/update_blocklists.

Fuzzer found something, is this a vulnerability?

Maybe. Install the plugin in a local test environment (for example you may use the one described in the Manual testing environment section) and analyze the bug.

Fuzzer found nothing, is the plugin secure?

Don’t assume that. The fuzzer finds some classes of vulnerabilities, but has its limitations.

Fuzzer founds nothing for most of the plugins – the purpose of the tool is rather to massively scan a large number of WordPress plugins, not to perform comprehensive tests of a single plugin.

Fuzzer found something in one run, but not in the next one. What happened?

This is possible. The fuzzer chooses payloads randomly, and introduces randomness in other places (e.g. how the== operator should behave in cases described in https://kazet.cc/2022/02/03/fuzzing-wordpress-plugins.html#patched-equality).

Doesn’t work? Have a question?

File a Github ticket or e-mail me: [email protected].