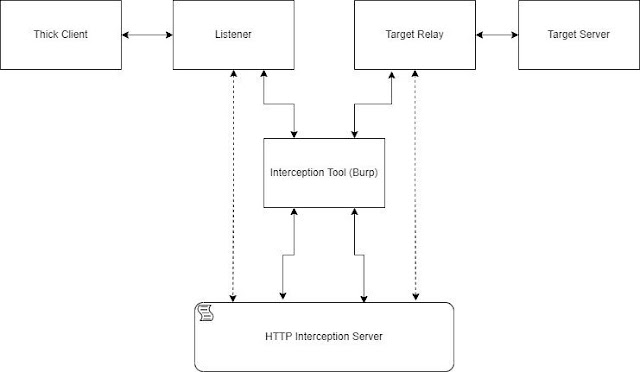 A little bit less hackish way to intercept and modify non-HTTP protocols through Burp and others with SSL and TLS interception support. This tool is for researchers and applicative penetration testers that perform thick clients security assesments.

An improved version of the fantastic mitm_relay project.

As part of our work in the research department of CyberArk Labs, we needed a way to inspect SSL and TLS communication over TCP and have the option to modify the content of packets on the fly. There are many ways to do so (for example, the known Burp Suite extension NoPE), but none of them worked for us in some cases. In the end we stumbled upon mitm_relay.

mitm_relay is a quick and easy way to perform MITM of any TCP-based protocol through existing HTTP interception software like Burp Suite’s proxy. It is particularly useful for thick clients security assessments. But it didn’t completely work for us, so we needed to customize it. After a lot of customizations, every new change required a lot of work, and we ended up rewriting everything in a more modular way.

We hope that others will find this script helpful, and we hope that adding functionality will be easy.

How does it work

There is the option to configure an HTTP proxy and use a tool like burp suite as an HTTP interception tool and view the messages there. This way, it is easy to modify the messages by using Burp’s “Match and Replace”, extensions or even manually (Remember, the timeout mechanism of the intercepted protocol can be very short).

Another way to modify the messages is by using a python script that the HTTP interception server will run when it receives messages.

A small chart to show the typical traffic flow:

mitm_intercept is compatible with newer versions of python 3 (python 3.9) and is also compatible with windows (socket.MSG_DONTWAIT does not exist in windows, for example). We kept the option of using “STARTTLS,” and we called it “Mixed” mode. Using the SSL key log file is updated (the built-in option to use it is new from python 3.8), and we added the option to change the sni header. Now, managing incoming and outgoing communication is done by socketserver, and all the data is sent to a subclass of ThreadingHTTPServer that handle the data representation and modif ication. This way, it is possible to see the changes applied by the modification script in the response (convenient for using Burp). Also, we can now change the available ciphers that the script uses using the OpenSSL cipher list format

The communication needs to be directed to the listener for intercepting arbitrary protocols. The way to do so depends on how the client operates. Sometimes it uses a DNS address, and changing the hosts file will be enough to resolve the listener address. If the address is hard-coded, then more creative ways need to be applied (usually some modifications of the routing table, patching the client, or using VM and iptables).

An example of a script that adds a null byte at the end of the message:

The tool requires a server certificate and a private key for SSL interception. Information about generating a self-signed certificate or Burp’s certificate can be found here.

If the server requires a specific certificate, a certificate and a key can be provided to the tool.

The demo below shows how to intercept a connection with MSSQL (this demo was performed on DVTA):

Connection to MSSQL is made by TDS protocl on top of TCP. The authentication itself is performed with TLS on top of the TDS protocol. To see intercept that TLS process, we will need two patchy modification scripts.