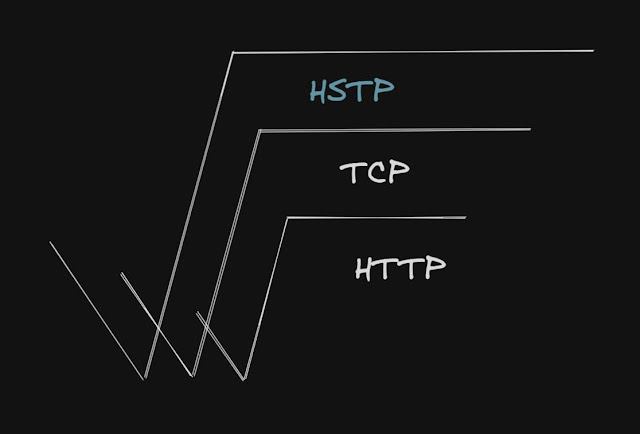 The protocol aims to develop a application layer abstraction for the Hyper Service Transfer Protocol.

HSTP is a recursion as nature of HSTP. This protocol implements itself as a interface. On every internet connected device, there is a HSTP instance. That’s why the adoption is not needed. HSTP already running top of the internet. We have just now achieved to explain the protocol over protocols on heterogeneous networks. That’s why do not compare with web2, web3 or vice versa.

HSTP is a application representation interface for heterogeneous networks.

Think about, we’re in the situation of one mother and one father lives a happy life. They had a baby! Suddenly, the mother needed to drink pills regularly to cure a disase. The pill is a poison for the baby. The baby is crying and the mother calls father because he is the only trusted person to help the baby. But the father sometime can not stay at home, he needs to do something to feed the baby. Father heard one milkman has fresh and high quality milks for low price. Father decides to try to talk the milkman, milkman deliver the milk to the father, father carry the milk to the mother. Mother give the milk to the baby. Baby is happy now and the baby sleeps, mother see the baby is happy.

The family never buy the milk from outside, this is the first time they buy milk for the baby: (Mom do not know the number of milkman, milkman do not know the home address)

this document you’re reading is a manifest for the internet people to connecting the other people by trusting the service serve the client and the trust only can be maintainable by providing good services. trust is the key, but not enough for survive. the service has to be reliable, consistent, cheap. unless the people will decide to not ask from you again.

So, it’s easy right? It’s so simple to understand, who are those people in the story?

Baby is in trusted hands. Nothing to worry about. They love you, you will understand when you grow up and have a child.

// Technical step explanation soon, but not that hard as you see.

What is a HSTP?

HSTP is a interface, which is a set of methods that must be implemented by the application layer. The interface is used to communicate with other nodes in the network. The interface is designed to be used in a heterogeneous network.

What is a HSTP node?

HSTP shall be implemented on any layer of network connected devices/environment.

HSTP node could be a TCP server, HTTP server, static file or contract in any chain. One HSTP node is able to call any other HSTP node. Thus the nodes can call each other freely, they can check their system status, and they can communicate with each other.

What kind of abstraction layer for networks?

HSTP interface shall be applied between any HSTP connected devices/networks.

What is the purpose of HSTP?

Uniform application representation interface: HSTP is a uniform interface, which is a set of methods that must be implemented by the application layer.

Heterogeneous networks: Any participant of network is allowing to share the resources with other participants of the network. The resources can be CPU, memory, storage, network, etc.

Conjucation of web versions Since the blockchain technologies calling as web3, people started discussing about the differanciates between the web’s. Comparing is a behaviour for incremental numeric system education’s mindset. Which one is better: none of them. We have to build systems could talk in one uniform protocol, underneath services could be anything. HSTP is aiming for that.

What are the components of HSTP?

The registry has two parts of the interface:

For demonstration purposes, we will use the following solidity example:

A HSTP node can be a smart contract, or a web browser, or a TCP connected device.

Node has full capability of adding more HSTP nodes to the network or itself as sub services.

Ethereum proposal is draft now, but the protocol has referance implementation Todo.sol.

You can test the HSTP and try on remix now.

How to play with the protocol?